I suppose that my idea of nesting manifesting itself in the form of craftiness was pretty spot-on.  The crazy crafting week I blogged about in my last post led up to me going into labor that night.  Thank goodness that I had finished up the big brother/sister shirts a few hours before.  Otherwise, they may not have ever gotten done. 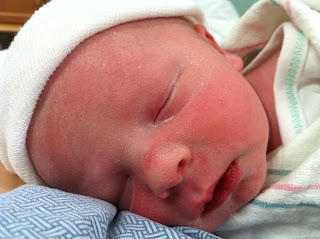 And all of the Spicy Pinecone munchkins together (modeling those snazzy shirts that were finished in the nick of time).  :) 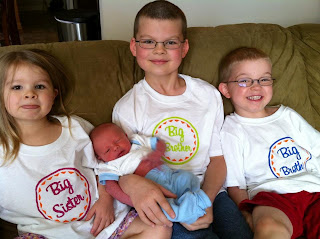 And last but not least, the newest addition taking a nap in one of the cotton gauze swaddling blankets I made for him.  Crafty nesting rocks.  I think Liam agrees. 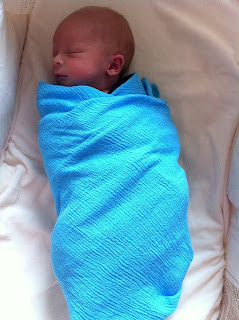 So it's been a bit of a crazy past week.  Been trying to get everything in order before the baby arrives so I've been on a bit of a crafting spree as well as nesting like mad.  (I've joked that my nesting is manifesting itself in the form of crafting... it just may be!)

To start with, I made a cute crab blanket from some fabric that I found on Fabric.com.  The crab material is https://www.fabric.com/ProductDetail.aspx?ProductID=9cf98664-8bea-4088-8db2-5a2bf2ecfc44 and I got some blue bubble flannel for the backing. 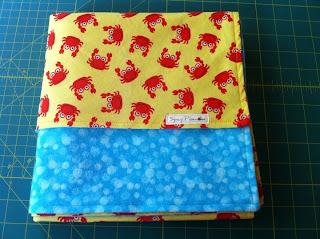 Then, our chickens (whom we refer to as "The Ladies") started laying!  We were so excited to discover our first egg last Monday. 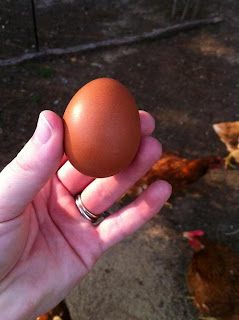 They started off laying one egg a day until we got to Day 5, when we got 3 in one day!

Since they're just starting out, the eggs are kind of sporadic.  However, the kids are super excited and now have to take turns going outside to check for eggs.  Each child has an assigned "egg day".  It's probably the one chore that they all fight over.  :)

Unfortunately, a few weeks ago, our neighbor's pitbull dug a hole under the fence and bit one of our chickens' heads off.  (Sorry for that mental image.)  The little kids don't know, but Cam helped me take care of the body and we were horribly upset to lose one of our ladies.  Not only because she was so close to laying, but we had raised her from a chick and each of the chickens really has become a pet at this point.

Next in our week, was the new dining room table.  We've had a counter-height table that seats 4 for a few years now.  However, it's hard for Scarlett to climb up on the chairs when it's dinner time and when Travis is home, the entire family can't sit down at the table at once.  (We had to set Scarlett up in her old high chair at those times, which she LOATHED.)  Time for a new table.  I scouted around and decided to pick one up from Overstock since they were having a sale and I purchased through a rebate site in addition to the sale and a coupon I had found.  In short, I got a good deal that I couldn't pass up.

However, putting the table together was an entirely different story.  It was a nightmare.  Holes weren't where they should have been, some pieces didn't have any holes at all, and the directions were flat-out wrong in some areas.  Now I've put together my fair share of furniture, but this one took the cake for being the biggest nightmare ever to have to be assembled.  In the end, though, it finally all worked out, though I will be writing the company a strongly-worded letter about their inadequate instructions, materials, and build time. 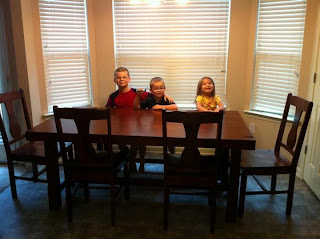 Then, I decided to really start attacking my "Project Tower" in my craft room.  The Project Tower is a tower of fabric that I have separated and stacked for specific projects.  Needless to say, it really has become a tower.  One of the items in my project tower was a hooded towel.  I had two that I had to finish, but I knocked out one.

For some reason, it looks Day-Glo orange.  It's bright orange, alright, but not as crazy as this picture makes it look.  It's got a dinosaur-print bias edging. 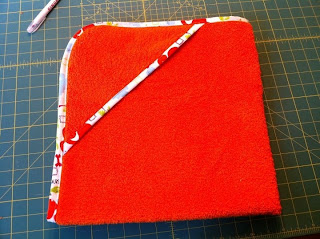 Last but not least, today I took the time to knock out the "Big Brother/Sister" shirts I've been planning on making for when the baby comes and the kids visit the hospital.  Gotta love the Silhouette and freezer-paper stenciling! 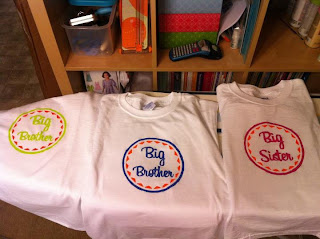 All-in-all, a very busy week!  I need to sit down and write out a list of the other projects that I'd like to finish so I can at least have it semi-organized.  Right now, I feel as though I'm scrambling a bit.  So hectic around here!

Hope you all are staying busy and are ready for the new school year coming up!
Posted by Sarah at 2:21 PM No comments: