I've had this project in mind for a few weeks now.  I've always loved the song, "Ol' Red" by Blake Shelton and wanted to create a project inspired by it.

I finally came up with this:

﻿   To make this shirt, I used Simplicity Pattern P2027 (Size A), which I found at Wal-Mart for $0.99.  All of my fabric was pre-washed  and then ironed before doing anything. 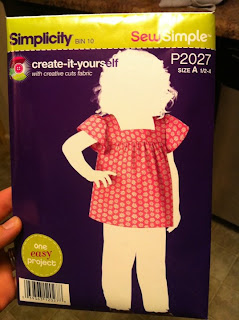 I modified the bottom of it by adding a 1 1/2" border of green to simulate grass.  To make the border, I cut a 4 x 20" strip (The size I made the pattern in was a size 2, so adjust the length and width of your strip accordingly... it should be the same length as the bottom of the pattern piece, though).  I folded this strip in half and pressed it.  Then, I folded each long raw edge down 1/2" towards the wrong side and pressed again... like a huge piece of bias tape.  Once your pattern pieces are all cut and before you sew anything, first sew the border onto the bottom of the main front and back pieces, right sides together, down the 1/2" crease you had pressed.  Then, just treat the piece as if it were a whole piece of the original main part and continue with the pattern.

Follow the pattern and finish the main part of the shirt.  Then, you'll start embellishing.


To get the silhouettes, I did a lot of image Googling.  The extent of my drawing ability is limited to stick people, so if the person wasn't in the right position, I didn't even attempt to alter it.  I searched high and low for law enforcement photos, running people, etc.  Some were pictures of actual people, others were free vector images.  Once I found the images I wanted, I scaled them to size and printed them off.  It may take a few tries.  You should see the number of "wardens" that I had to print.  It was ridiculous.  Also, the only law enforcement guy I found in the "holding the leash" position was insanely large so I had to give him an Xacto tummy tuck or you wouldn't have seen his hand.

Once you've got your silhouette images, cut them out using a Fiskars swivel knife.  For some reason, the PX didn't have a regular Xacto knife, but this is like a miniature version and it worked okay on the paper.  I cut out the silhouettes, making slight modifications as needed.

Now it was time for the Steam-a-Seam (S.A.S.).﻿  I used the sticky-back stuff to keep the fabric in place while I cut it. 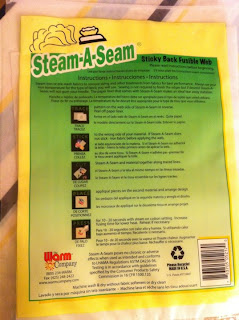 I cut a strip of the S.A.S., then pulled off the paper, leaving the sticky side up on the ironing board.  Very carefully, I placed the black fabric on top and smoothed it out.  Then, one by one, I pinned the silhouettes to the fabric and cut them out.  I tried using the Fiskars knife on the fabric, but it just pulled it and made it all crazy.  Instead, I had to use my small fabric scissors to cut them out very carefully.  In the end, I had my silhouettes all cut out.  One of each, except for the standing dog, which I cut two of... one a mirror image.  (Just flip the paper silhouette over.)

Then, I used more S.A.S. and put a scrap of green fabric on, the same way that I did with the black fabric.  I freehand cut some grass and set those aside as well.

Now comes the fun part.  Laying it all out on your shirt and moving the pieces around.  Find positions that you like and then seal it in place by ironing it.  Read the back of your S.A.S for specific instructions.  I pressed the front about 15 seconds, let it cool a tad, and then pressed through the back.  Those suckers are STUCK.

Once you've got your silhouettes in place, you can add buttons and do your hand embroidery.  I hand embroidered the collar and leash (adding a metal bead on each of "Ol' Red's" collars to look like a tag), and the bow collar on the female dog.  Buttons were hand sewn and the rose on the front of the shirt was attached.